Here is a look back at the championship wins

Jim won his 2nd track championship in 2004 at Lincoln Speedway and this points chase went down to the wire on the last night as well. Jim won his heat and the feature on that last night and was able to take 1st in a close points race with Jim Farley.

Jim's third track championship came in 2006 at Farmer City. This was one tight points race with the 01 of Jeremy Nichols that also came down to the last night of points racing. The feature was quite exciting in this chase, Jim started 24th, out of 24 cars, driving to a 4th place finish while Jeremy Nichols won the race. This drive from 24th to 4th allowed Jim to win the championship by 7 points.

Jim's wrapped up his 5th track championship, and his 3rd in a row at Farmer City, in 2008 at Farmer City raceway. Going into the night he had only a 12 point lead over the 9 of Terry Miller. To win the championship Jim won his heat on the last night, while Terry got 2nd in his, and Jim got 2nd in the feature while Terry Miller finished 3rd. The drama of the evening came when several people helped Jim replace a broken gas pedal in betwen the heat and the feature. Jim ended up with 797 points for the year, winning the championship by 18 pts over Terry Miller who ended with 779.

In 2009, Jim won his 6th overall championship and 4th in a row at Farmer City Raceway. Once again, it was battle between the 82 and the 9 of Terry Miller. It all came down to the feature. Where Jim had tire issues and Terry spun out sending them both to the back at different points in the race. In the end, Jim finished 7th and Terry 8th.The 7th place feature finish gave Jim 36 points, while Terry Miller received 34 points for his 8th place finish. So, the final points tally for the 2009 season is Jim Quinn WINS the points Championship with 758 points, finishing 33 points ahead of 9 Terry Miller who ended up with 725. 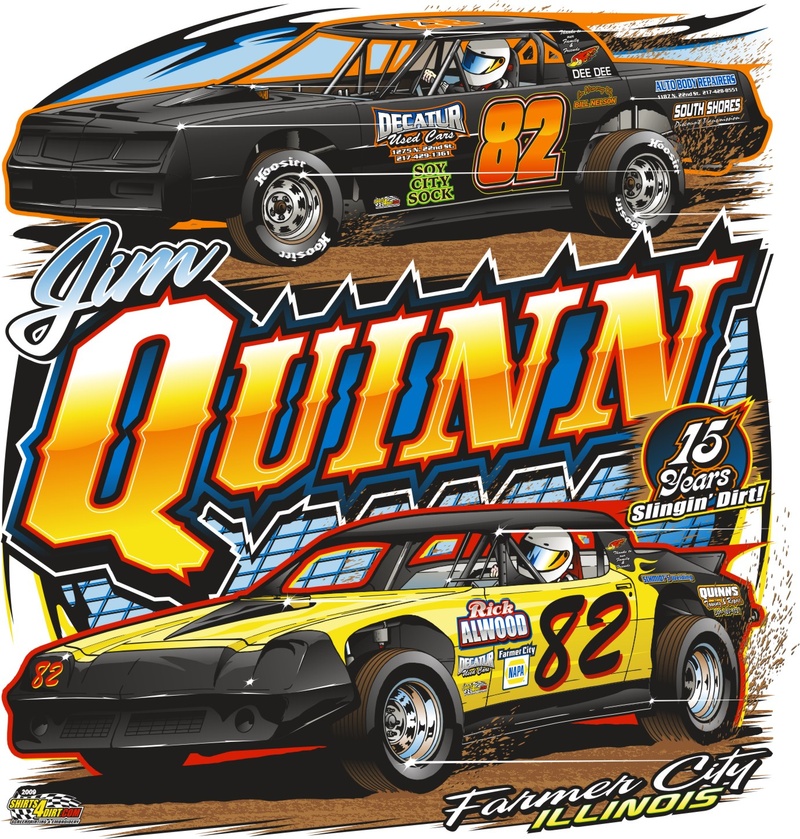